Deep Sea Mining … Out of Our Depth

Aliens finally made it to planet Earth. And it just so happens these aliens value — above all else — the American quarter, those shiny metal pieces emblazoned with George Washington. Upon surveying the planet, the aliens note that the highest concentration of quarters are located on Manhattan Island. So, they deploy enormous mechanical arms that raze New York City, destroying icons of culture and human achievement hundreds of years in the making. What’s left is rubble strewn with quarters, which the aliens methodically gather up and stockpile. The aliens congratulate themselves on the efficiency and handsome profitability of their operation.

If this sounds like an absurd manner in which to value one of the greatest cities on Earth, that’s because it is. And while this story is fantasy, sadly the same mentality is playing out now on the floor of the ocean. For the better part of a century, humans have scraped the ocean floor with massive trawlers that level hundred-year-old corals and destroy diverse and unknown ecosystems in the pursuit of a singular, short-term value, whether it be cod, squid or shrimp destined for a plate thousands of miles away. The UN Secretary-General reported in 2006 that 95 percent of damage to seamount ecosystems worldwide is caused by deep sea bottom trawling. Now, in 2016, a new threat is emerging to the benthic ecosystems deep within the blue ocean: deep sea mining. According to our partners at the Deep Sea Mining Campaign, “the focus of deep sea mining (DSM) is the deposits laid down over thousands of years around underwater hot springs, or hydrothermal vents. For example Nautilus, a DSM project in the Pacific has secured or is in the process of applying for the exploration rights to 534,000 km2 of the sea floor in PNG, Tonga, the Solomon Islands, Fiji and New Zealand. In addition, many other companies are waiting to see how Nautilus fares before taking the plunge themselves.” 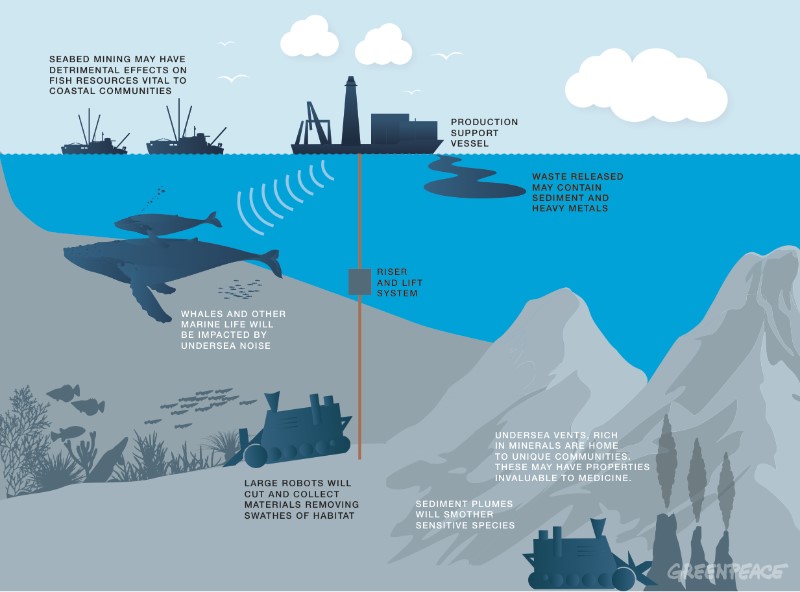 The Deep Sea Mining (DSM) Campaign is an association of NGOs and citizens from the Pacific Islands, Australia, the US and Canada who are concerned about the likely impacts of DSM on marine and coastal ecosystems and local communities. The DSM Campaign started in late 2011 in response to the frenzy of sea bed exploration in the South Pacific. Approximately 1.5 million km2 of ocean floor is currently under exploration leasehold for deep seabed mining.  The world’s first license to operate a deep sea mine has been granted in the Bismarck Sea in Papua New Guinea to Canadian company Nautilus Inc. The DSM Campaign’s unique approach combines regional policy interventions, human rights, science based advocacy and working with local NGOs and community in PNG and the Pacific.

Those quarter-loving aliens might have said, “What’s the big deal? We can’t see the harm here.” Indeed, that’s the same tune that DSM interests are humming: the upside is huge, environmental concerns are overblown, operations will be safe, what could go wrong? The truth is no one — neither oceanographers or DSM companies — know very much at all about deep sea ecosystems. Remember, only 5% of the ocean has been directly observed by anyone. Some scientists believe that hydrothermal vents are where life first started on earth. If so, these environments and these ecosystems could provide insights into the evolution of life. This means that in the Pacific many species could become extinct before they have even been identified. And what about the potential toxicity of metals that will be released into the ocean water from DSM operations? Might they find their way into the food chain and contaminate seafood eaten by local communities? At the minimum, more study is needed to answer this basic and critical question.

Resource hungry nations are viewing Deep Sea Mining as the next gold rush. And momentum is building by the month. For example, check out these recent digital newspaper clippings:

Any observer to the Deepwater Horizon catastrophe knows that corporations focused on profit from resource extraction cannot be relied upon to self-regulate for safety and responsible environmental stewardship. Deep Sea Mining is no different. Dr. Sylvia Earle has perhaps put it best: “It’s like a land grab. It’s a handful of individuals who are giving away or letting disproportionate special interests have access to large parts of the planet that just happen to be underwater. The vast expanses of the central Pacific seabed being opened up for mining are still largely an unknown. What are we sacrificing by looking at the deep sea with dollar signs on the few tangible materials that we know are there? We haven’t begun to truly explore the ocean before we have started aiming to exploit it.”

To join in the fight against Deep Sea Mining, read the information made available by our partners at the Deep Sea Mining Campaign. You can also follow them on Facebook, Twitter and YouTube. Another good backgrounder is this Huffington Post article by Phil Pauley.